For over a decade London Diocese has been perceived as bucking the downward trend in attendance of the Church of England as a whole, as claimed most recently by The Economist (9 Jan 2016) in one of their regular reminders of the growth of evangelical Anglican churches in the capital (10 May 2012, 17 Jan 2015).

It is puzzling that The Economist couldn’t wait three days before writing their article, entitled Resurrection. They knew the 2014 statistics were due soon and should have known that the story may change. Here is their selection and presentation of the data: 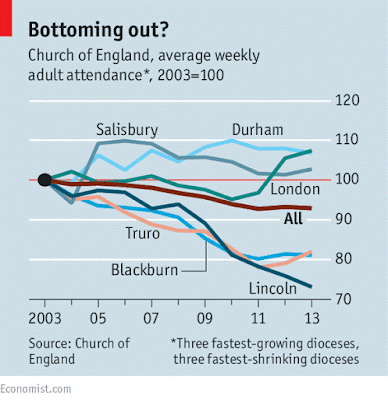 The bigger mistake was not the impatience but the crude measure of growth. Because of the uncertainty in each data point (typically ±5% according to the 2013 statistics), the overall trend is a far more reliable indicator than the difference between the end points. Statistics for Mission now provides helpful visualisations of the trends for each diocese: 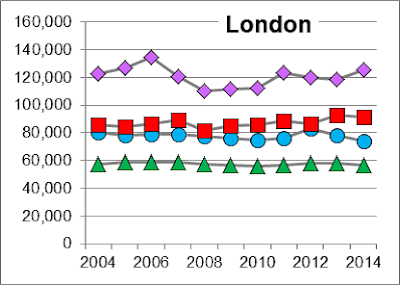 From the top, these lines are:
Christmas attendance
Easter attendance
Average weekly attendance (all age)

The trend over the 10 year period is flat for both uSa and AWA.

The plateau in recent years is acknowledged on the Diocese of London website and in the report Another Capital Idea by Bob Jackson and Alan Piggot. However, the diocese’s claim that Electoral Roll membership is growing by 2.5% per annum is out of date. Comparing the 2014 figure with the previous equivalent on the 6 year cycle (2008), as recommended by the statisticians, gives an annual growth rate of just 0.2%.

London’s reputation for growth comes from the impressive decade 1995-2005, as shown in this figure from Another Capital Idea: 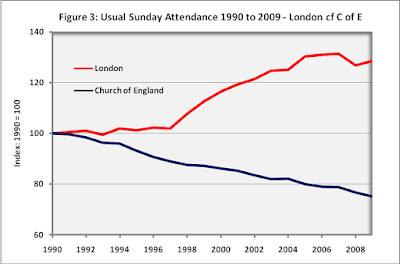 This growth followed a period of significant decline. The decline and growth are shown together in another figure from Another Capital Idea: 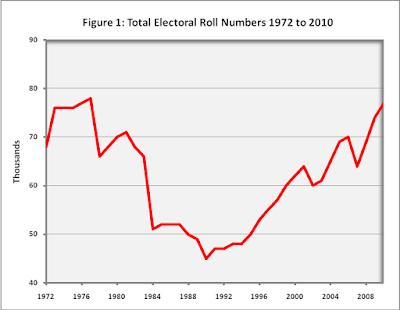 It is instructive to compare this with the large decline and increase in the population over the same period: 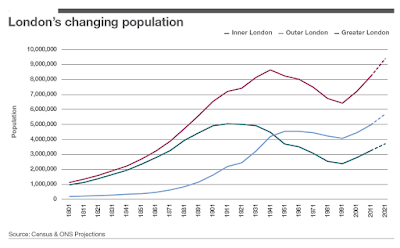 The population continues to grow, passing the previous peak of 8.5 million for Greater London just about now, while the diocesan attendance figures are level. The population of London Diocese has grown by 17% in the period 2004-14 (according to the C of E statistics).

The benefit of population growth to the Church is enhanced by the higher proportion of Christians among the immigrants compared with the general population. It is true that the Pentecostal churches have gained far more than the Anglican Church, and we cannot tell how much lower the diocesan figures would be without the Christian immigration factor.

London’s advantages don’t end there. In 2014 the Sutton Trust published the report Parent Power? Using money and information to boost children’s chances of educational success, research based on a YouGov survey of parents, which showed that ‘London respondents with a child at state school were significantly more likely to report that they had attended church in order that their child could enter a church school (11% v 6% of those outside London)’.

It would be interesting to know how much this factor has changed over the last decade or more. It is certainly true that parents have become more engaged in their children’s education.

Finally, there is the relative ease and speed of filling clergy vacancies in the south-east compared with the north, and north-east in particular, as surveyed and reported by the Church Times (7 Feb 2014).

With all that in mind, compare and consider the graph of attendance trends for Durham Diocese, from the 2014 Statistics for Mission: 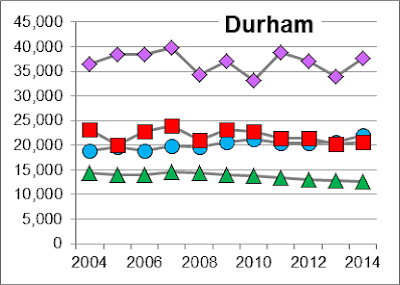 It is a mixed picture: an upwards trend for AWA, a downwards trend for uSa. Say that on average attendance is stable, then note that the rate of population growth in Durham Diocese is the third lowest in England, just 2.8% for the period 2004-14 (only Carlisle and Hereford are lower).

Should we be talking about ‘Capital Growth’ or a ‘Northern Powerhouse’? Neither at this stage, on this evidence.

Attendance in the Church of England overall dropped by about 2% from 2013 to 2014, higher than the average yearly drop over the last decade. As noted above, little can be read into one year, but it is clear that there is still no sign that the rate of decline is reducing.

This is only discouraging if we look to attendance figures for our encouragement. We need to be free from anxiety about growth without slipping into complacency. We need to work, pray, plan and adapt for growth without our joy or confidence depending on the results.

There seems to be little evidence that the kind of growth which The Economist likes to highlight has proved itself to be the big answer for London, let alone the big answer to be translated across the whole of England.


Of course, there are many spectacular initiatives in London which have been well publicised and from which the wider Church can learn. But if this analysis has any value, it is to demonstrate the age old lesson of not judging by the outward appearance. Persistent and growing faith, against the odds, in the most difficult of circumstances, is often not eye-catching, but equally impressive. We know that at an individual level. It can be true for parishes and dioceses also.
Posted by Mark Hart at 15:59