If only the Church of England didn't believe in genocide 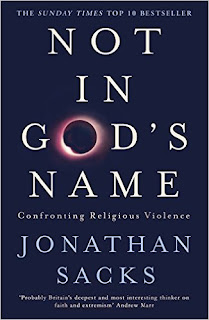 I recently read Not in God’s Name: Confronting Religious Violence by Jonathan Sacks and found it surprisingly relevant to the Church of England. It’s not that any of the church's members are in favour of the practice of genocide today, but many read certain Scripture passages as teaching that it has been divinely sanctioned in the past. That is a problem for today, because a way of reading the Bible which proves so wrong on these texts is capable of causing harm when applied to other texts.

Here is one clear example of the ‘ban’, an exterminatory form of warfare also found in the book of Joshua, and mandated in Deuteronomy:


Samuel said to Saul, ‘The Lord sent me to anoint you king over his people Israel; now therefore listen to the words of the Lord. Thus says the Lord of hosts, “I will punish the Amalekites for what they did in opposing the Israelites when they came up out of Egypt. Now go and attack Amalek, and utterly destroy all that they have; do not spare them, but kill both man and woman, child and infant, ox and sheep, camel and donkey.”’ 1 Samuel 15.1-3

To be fair, rarely will anyone blithely accept such a text as trouble free. Philip Jenson (an Anglican priest and lecturer in Old Testament at Ridley Hall, Cambridge) has written a booklet on the subject entitled The Problem of War in the Old Testament. It is published by Grove Books (‘evangelical and Anglican’) and recommended by Ian Paul (a member of the Archbishops’ Council).

Jenson recognises the ‘problem’, but the solution is to say the end justifies the means:


‘The ban appears to contradict the character of God revealed in the rest of the Bible as loving, just, and merciful to all (Gen 1-11, Jonah). Yet the key contextual issue is whether this extreme measure was the only realistic possibility of creating a society and culture that held fast to the true God. From a larger canonical perspective, what we have here is the tragic necessity to choose the lesser of two evils… if the larger purpose was the salvation of the world, then perhaps there was no alternative.’ (p.13f.)

This last point is later made more explicit:


‘[The ban] forces us to ask about the ends that could possibly justify such practices. From the larger Christian perspective this then becomes a question about the necessity of the coming of Jesus Christ in the fullness of time as a Jew, a member of the nation made possible by these wars.’ (p.18)

Amy Orr-Ewing is also Anglican, and European Director for the RZIM Zacharias Trust, Director of Programmes for the Oxford Centre for Christian Apologetics, and Associate Tutor at Wycliffe Hall. A prominent speaker, especially among university students, she has a particular focus on ‘a rational defence of Christianity’ and has addressed the question ‘How can we justify the killing in the Old Testament?’ Her answer has similarities to that of Philip Jenson:


‘The reason for the God-sanctioned war and destruction of the inhabitants of Canaan was the likely corruption of the moral and spiritual standards of Israelite society: “Otherwise, they will teach you to follow all the detestable things they do in worshiping their gods, and you will sin against the Lord your God” (Deuteronomy 20:16–18). This is important because God had chosen Israel to bear God’s self-revelation to the world — the task of making God known.’

New Wine have addressed this subject in conference talks and magazine articles by Simon Coupland, Vicar of St Paul’s Kingston Hill (see the New Wine magazine, each 2011 issue). He says, ‘The reason why God wanted the Canaanites destroyed was the utterly detestable nature of their religion in his eyes.’

On the appointment of Donald Allister as Bishop of Peterborough in 2009, the journalist Andrew Brown reported on a telephone interview about his views on various matters. He asked, ‘…surely there were moral objections to the idea that God would so gleefully facilitate the genocide described when the Israelites took possession of the promised land?’ Donald Allister replied, ‘There are lots of books written on that subject, and I am not an expert on it … I have nothing sensible to say on genocide.’ The bishop declined to comment, understandably sensing a trap, but that in itself suggests he found it difficult simply to say that God has never commanded nor condoned genocide, whether because of his own contrary view or because of his awareness of the extent of the contrary view in the church.

All this indicates that a significant part of the Church of England may believe there was a time when Israelites killed Canaanites on a large scale, at God’s command and with his approval, in order to cleanse the land.

How may this be squared with the understanding of God provided by the Bible as a whole? Try putting the following together: 1. God is fundamentally self-giving love and grace, showing infinite mercy and patience, making himself known in Jesus Christ, whose way is the cross, and through whom has come peace and salvation; 2. In order to prepare the ground for that salvation it was necessary to cleanse a land of some foreign men, women and children.

It can’t be done, and the attempt is made only because of a failure to realise the extent to which biblical texts need to be interpreted. We speak of the Bible as God’s word, and say ‘This is the word of the Lord’ after reading it in public worship, but that does not mean God’s truth lies on the surface of the text. This is not to pick and choose the texts we like, but to read all Scripture in the light of the whole Gospel, recognising that the word of God thereby communicated is known by discernment, through the Spirit, as the Church reads together, over time.

On the face of it, 1 Samuel 15.1-3 tells us that in times past God commanded genocide. We shouldn't read it like that. We recognise that it has been written that way, and we start asking why. We follow that question in the context of reading the whole book, and as we look deeper, a response is drawn from us as we engage with the players in the story and the authors of the story. Thereby it is no less God’s word.

As Jonathan Sacks puts it,


‘Living traditions constantly reinterpret their canonical texts. That is what makes fundamentalism – text without interpretation – an act of violence against tradition. In fact fundamentalists and today’s atheists share the same approach to texts. They read them directly and literally, ignoring the single most important fact about a sacred text, namely that its meaning is not self-evident.’ (p.218f.)

Not that I wish to apply the label ‘fundamentalist’ to any of the Anglicans quoted above. Far from it, but on this point I believe they’ve got it wrong, and their desire to take seriously particular texts in isolation has resulted in unfaithfulness to Scripture as a whole.

By this approach evil may be called good, and defended by a kind of reverse theology and interpretation (accept the meaning in the surface text then construct a support): these were different times; God is very holy; the people were really sinful; actually not everyone was killed; it was all in a good cause…

No matter how extensive the mitigation, it doesn’t wash. No-one gets hurt though, because it’s not as if genocide is being advocated today.

The worry is if people (not necessarily the same people, though a strong correlation is likely) make the same mistake with another handful of texts, and a desire to take them seriously in isolation results in doing harm, not just to the tradition, but to real people today.

What if there are a few texts where on the surface that which is good is called evil? What if they are read that way and defended by reverse theology and interpretation? What if that good is maintained as being evil, even though it embodies the love, grace and faithfulness to which the whole of Scripture points? What if the blessing of that good is therefore denied?